Scorched! By the Bernie Madoff of Concert Promoters 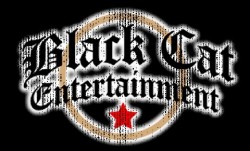 There were near riots in downtown Los Angeles this past Sunday night at the Mayan Theater. No, Occupy LA didn’t gear back up, but Rich Vreede of Black Cat Entertainment was back in action… spreading his unique brand of concert promotion and “nice guy” misery, which means a packed house but unpaid bands, ripped off “investors”, people on the verge of tears trying to maintain their dignity and in the end, a police escort out of the building among a throng of the pissed off for a guy I’ve dubbed the “Bernie Madoff of all Concert Promoters”.

The approximately 650 attendees paid their $20-$25 at the door of the Mayan theater for the Valentine’s Ball and spent unknown thousands at the bars (beers at $8 a pop) and would have no idea that most, in not all the bands they just enjoyed would end up not getting one penny owed them by the promoters. 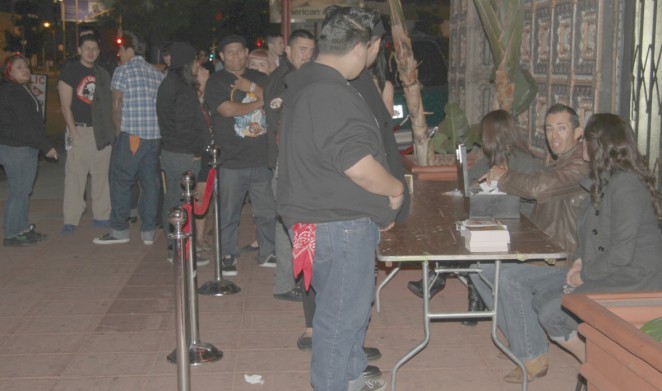 There were hardworking and respected guys like Elvis Cortez from the bands like Left Alone shaking their heads in disbelief that they had to put up with such amateur behavior just a couple of hours after the show.  A booking agent for another band said that in all her years of booking, this would be the first time she’d never gotten paid.

The band from the UK who flew all the way over for the gig told me that in the Europe they were always paid their due, even when the crowd was light, much less when the crowd was packed. Word was, and I wasn’t able to substantiate it personally but believe it to be true, that even the lead band Frantic Flintstones got stiffed. My buddies from Italy, Evil Devil good naturedly took it all in stride, just saying “he hasn’t paid us everything just yet”. Good luck fellas! At least you got a trip to the U.S. out of the deal. 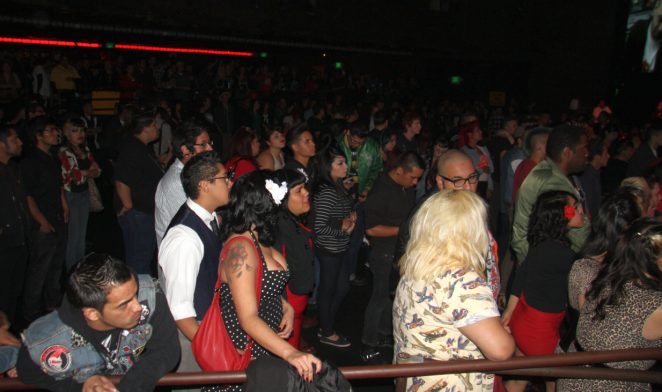 The Mayan was packed and no one gets paid?

And then there was the pissed off “investor”, a stocky, muscular dude with a heavy accent that I would never, even think about crossing up with financially, who chased Rich down and reportedly got him in a semi-headlock before security could intervene and break it up.

By the end of the concert there were people floating around Rich like so many flies around cow dung.   And yes I dear reader, am sad to report, was one of the unfortunate flies.  Yes, I was one of the pissed off (or pissed on), who had been suckered into thinking I was going to be helping a nice guy, I thought I knew. A guy, who, though sometimes seeming a little disorganized at times, had always managed to pull off some pretty good events for over 10 years.

Oh, but little did I know then, when I loaned my “friend” some money for a deposit he needed to make to secure a venue for the event which was originally supposed to take place last September at the Music Box, that once money is obtained (in my case under fraudulent circumstances which I can prove in court) by the Bernie Madoff of Concert Promotions, your chances of getting money back depend on where you are in the pyramid scheme of payments, not how tight your legal agreement (mine is water tight) or how long you’ve known the guy (I’ve known him since 2006). 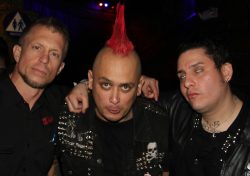 With Elvis from "Left Alone" and Alex from "Normandie Blue"

For me, it’s a relatively small business hit. If I never see it, I’ll absorb it in stride as part of the cost of doing business, but for the bands who had set aside the dates, refused other gigs and in the process promoted their hearts out so that someone else could make all the money with what turned out to be their free music? Well, it is an understandably bitter pill to swallow.  We all know the stories of musicians who make extreme sacrifices, especially financially, to make their music, just to work their way up to a level where they can actually get paid at a gig like “The Valentine’s Ball”. It’s not right, that once they finally get that opportunity, morally challenged promoters then screw them some more. Some people I’m sure were sorely depending on that money.

I’ve recently learned through this experience, the list of bands shorted by Black Cat over the years reads like a Who’s Who of psychobilly acts. From the famous to the not so famous, the bigger the tab, the less likely the band is going to get paid.

I’m not sure who made all the money at the Valentine’s Ball at the Mayan Theater in Los Angeles last night, but it sure wasn’t the hardworking and talented people who the people paid to see. And I gather from the angry crowd, the police escort, the Mayan Theater Security Guards who kept insisting that we turn off our cameras and go home and the weasley way our mutual “buddy” Rich tried to slink out of the building under heavy police escort (seriously, there 6 police cars and 10-12 officers), that it wasn’t Rich either. I mean he’s not that crazy is he? Or is he? There was some rumor of some other mystery guy, disappearing with the money, but nobody knew who this guy was. But one thing is for sure, with this packed of a house, somebody made off big, like a bandit. 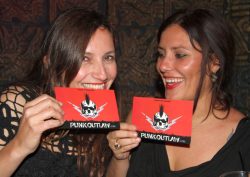 There is more to this story and I’m sure we’ll get to the bottom of it soon. Yeah right ha, ha! But in the meantime, I kept thinking about the money I loaned the guy on good faith and a rock solid contract that now seems to not matter anymore. I certainly don’t trust the California justice system but I’ll give it one shot in this instance on principle alone and because there are few other options. Hopefully, they’ll prove me wrong and I’ll write a mea culpa. At least I have the resources to chase the guy. Some people will have to try to simply move on.

For me, that money had been set aside for marketing for the new Punk Outlaw Record label we were starting. I thought it would be a good way to help a “buddy” out while also promoting the label, and then when the INTEREST FREE LOAN was paid back as promised and agreed to on the day of the concert, I could promote some of my own events and maybe even bring a band or two from South America.

But when it became clear I was dealing with a con (apparent the very next day after my check cleared, when my phone calls which up to that point had been returned immediately, began a markedly slower pace of returns or were downright ignored) and not a reputable business relationship, I needed to program myself with different motivation to keep doing the crazy, mind boggling stuff you have to do to try and get money from someone who doesn’t have a job, someone whom I once treated to a Social Distortion concert and didn’t even have the common decency to even buy me a beer as a thank you.

I pledged to myself that if I got any of the money back, I’d offer it as microloans to people who really need it. People in places like Africa, South America, Southeast Asia, Haiti, etc. who literally don’t have anything. Microloans are tiny loans (as small as $25) that can help people who are trying to lift themselves out of impossibly bleak circumstances by doing something that our buddy Rich doesn’t seem to understand, working.

With as little as $25, you can actually help change an entire family’s life by loaning them money to buy cows, pigs or chickens or a piece of farm equipment for their farm, or perhaps a sewing machine so a single mother can start a tailoring business for her village, or whatever the case may be. I had already set my sites on Kiva, a fine organization that passes all scrutiny and is recommended by major media outlets like CNN, etc. (yes, charities have their own Bernie Madoff’s who do the same thing so do your homework).

I knew I’d have to document every bullshit email exchange, facebook encounter and telephone call where the guy said one thing and did another time after time and I’d have to try and keep my cool and not call him a scumbag loser and liar. It was exhausting and the only thing that kept me going was that I could allocate that money, borne in such a negative, shitty circumstance of one person trying to con money out of another (some rob you with a pistol, others with a pen), and give it to someone who genuinely needed it. Someone who’s life would literally change overnight. Out of the cracks of the sand in the desert the most beautiful and colorful flowers so often grow, that was my optimistic and obviously unrealistic hope in this situation.

But alas after chasing the guy down Friday night at the Pre-Valentine’s Ball party where he said “whatever your thinking is happening, put it out of your mind, it’s not”, after numerous emails and promises that I’d for sure get paid back all my money the night of the concert “if not before” (can’t tell you how many times I heard that one), from “nice guy” Rich of Black Cat, I was ultimately made painfully aware that if I were to get my money, I’d be standing behind a long line of people, many who probably need it much worse than me.

It’s a shame that one person can cause so much pain, negativity and misery. One buddy told me a story about how on another occasion of the guy stiffing artists, one poor soul from Europe, this big, intimidating psychobilly musician with a Mohawk was literally crying in his hotel room lamenting “I don’t understand why we can’t get paid, this never happens in Europe. Why do people do business this way?” Good question.

Well, I could be cynical and say welcome to Los Angeles, the music industry or the psychobilly scene my friend… but that would not be right. There are many good promoters in the music industry and in the psychobilly scene in LA.  I guess it’s welcome to the land of Black Cat Entertainment, a parallel universe where a guy who rarely pays anyone, keeps a promise or apparently tells the truth, still is able to keep promoting concerts and people still go and bands still perform and suckers like me are still born every minute.  I say that madness has to stop and I hope it stops with me and anyone reading this blog. See you in court Rich.

If you’re reading this post and especially if Black Cat screwed you over, I invite you to visit Kiva and offer a microloan for $25 or $50 or whatever you can afford whenever you get to where you can afford it again. I know it sounds weird to lose money and then give some more away, but I think maybe we can help offset the miserable karma put out by people like Black Cat and the ilk by doing some actual, real good in the world.

See the video from after the show HERE:

Has Black Cat or another promoter screwed you over? Then shoot us an email at info@punkoutlawrecords.com or leave us a comment. Our new site www.Scumbagpromoter.com will be up soon and we’ll tell your story and publicly out some of these shady promoters and maybe, who knows,  we can even  help clean up the scene a bit.