Normandie Blue - It Is What It Is 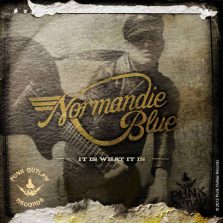 To produce Normandie Blue’s debut release, Alex Blue secured the services of legendary producer and musician, John Avila (Oingo Boingo, Quetzal, Reel Big Fish, etc.).  There were no half-measures. The band submerged themselves into six months of pre-production to insure they were at the top of their game when it came time to lay down tracks.

Recording the album was no easy task. Alex was forced to sell his car to help finance a project that was also draining him emotionally. He occasionally had to walk part of the 25 mile route to the studio but looking back considers this a small price to pay when he was finally able to hear the release… a release that for so long was just a dream, but is now a reality.

‘It Is What It Is’ is the title of Normandie Blue’s debut release and is that reality. Alex began Normandie Blue for all the right reasons, not for fame or money but to write honest music others can relate to. You will be hard pressed to find anyone who won’t be inspired and moved while also thinking, “but for the grace of God, there go I” when hearing this release. Having said that, despite the beauty and uplifting nature of the tunes, this is still very much the Devil’s music and the band wouldn’t have it any other way!

‘It Is What It Is’ is now available on iTunes, Amazon Music, CD Baby  and other major digital music sites.

The Story So Far… Punk Outlaw Records is proud to present Normandie Blue, a Punk band that plays melodic, haunting material with lyrics so personal that  you may find yourself looking over your shoulder wondering how this Los Angeles based band could possibly know your most private thoughts. Normandie Blue was founded by Mexican-American musician, Alex Blue who began writing and playing music at the ripe old age of 12. By the age of 15 he fled his family’s home to begin his pursuit of a music career. This often solitary existence both galvanized and softened Alex as he soaked […]
More about Normandie Blue