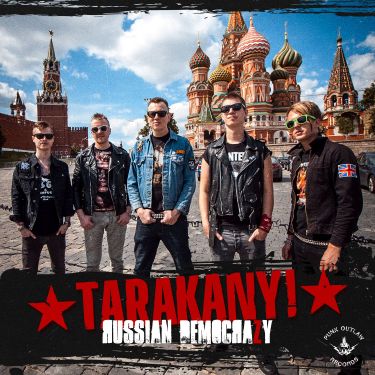 Tarakany! are one of the most well-known and longest running punk-rock bands in Russia, no small feat in the largest country in the world where western influenced music, media and fashion were outlawed up until just two years prior to the band’s formation in 1991. Like Russia, the band has seen its share of changes, but Tarakany! stayed true to their roots, performing energetic punk and rock-n-roll in the tradition of bands like The Ramones, Social Distortion, Rancid, and Motorhead and Bad Religion.

“I met Dima, lead singer of Tarakany!, the 1st day of my trip to Russia in late 2010 and was amazed at his work ethic. He dragged me to rehearsal at 10 A.M. Moscow time. What rock band rehearses at 10 A.M.? My rapidly aging, jet lagged body didn’t fully comprehend Tarakany’s talent until weeks after I returned home with a fistful of their CDs and was simply blown away by what I heard” says Robert Rose, founder of Punk Outlaw Records. “The fact that members of well-known bands like Anti-Flag, Frank Turner, Louna and Useless ID are contributing to their English language release is a testament to the respect these guys get. We’re thrilled to be release “Russian DemoCrazy” and turning new audiences on to an excellent rock band like Tarakany!”

For the last 20+ years Tarakany! has toured Russia, Eastern and Western Europe and parts of Asia playing venues ranging from tiny hole-in-the- wall clubs to massive sold out stadiums and popular music festivals in front of tens of thousands of fans. They’ve shared the stage with legendary bands such as NOFX, Toy Dolls, Agnostic Front, Anti-Flag, Misfits, MxPx, Skatalites, MC5, Monster Magnet, Offspring, Exploited, Stranglers and many more. Tarakany! also had the honor of opening for the only Sex Pistols show in Moscow and in Europe and then toured with legendary drummer Marky Ramone of The Ramones.

Punk Outlaw Records is a digital record label and publishing company with a focus on distribution and promotion of socially conscious punk, rock, ska, reggae, rockabilly, world, psychobilly and other musical genres from around the world. The label’s mission is to facilitate music from a global perspective and enhance music’s ability to bring social awareness and change to some of the world’s most pressing issues while entertaining and uplifting audiences.