I live on the west coast and while I THOUGHT that meant sunshine and warm weather (it does not), at least I was right about one thing… it does mean some of the best punk rock in the United States.

On the west coast, punk is still a legitimate force in the music world and you can find pretty much whatever strikes your fancy… Non-commercial, underground bands (I know… redundant), to legends who have flirted with the mainstream (NOFX, Offspring, Social Distortion, Pennywise, Bad Religion, etc.) to those who have fully gone over to the other side (Green Day).

Part of the reason these guys have been so successful is that punk is, gasp… cover your ears you punk purist, part of the mainstream music scene here. Blasphemy! I know..but you will actually hear punk on the radio here.. and not JUST on the low end of the dial during off hours, it’s blasting on 98.7 and KROQ. 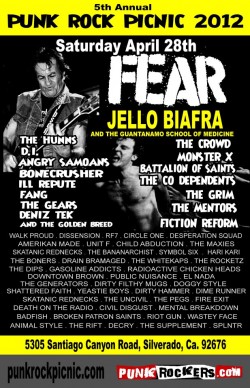